Registration has been disabled.

Enter your email address and we'll send you a new password. If remembered password go back to login. 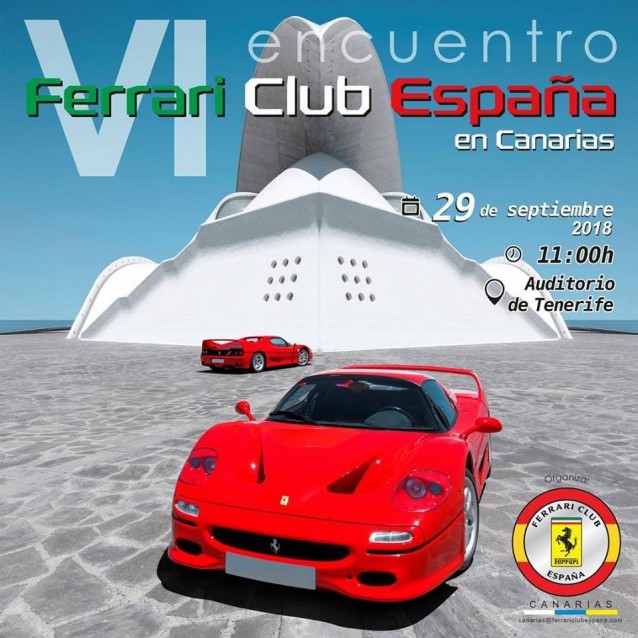 The 6th Ferrari Meeting, which our Club delegation in the Canary Islands held on September 29th, took place on the island of Tenerife. The concentration point from where the Ferrari caravan would leave, this time was located in the emblematic square of the Auditorio de Tenerife (Adán Martin), where an important media display was set up, with photocall, promoter hostesses, live DJ music and a VIP catering area for all the participants.
At around midday, a route was taken that would take us through the Teide National Park, in a spectacular journey through the forests and glens of the famous TF24 road (La Esperanza), to the Teide Cable Car parking lot, where all the participants parked their Ferraris to rest, while at the same time quenching their thirst, thanks to a Truck that had moved the Dorada firm, which gave all those present some “Dorada Sin con limón” soft drinks, among other drinks.
Close to lunchtime, the Ferraris left the parking lot to head in a caravan to the spectacular Royal Hideaway Corales Suites Hotel, this time on the TF38 (Chio) road. Awarded as the best Hotel in Europe 2018, the Royal Hideaway is located in one of the most privileged areas in the South of the island of Tenerife. A buffet lunch was served in the hotel’s restaurant, exclusively designed and personalized for those attending the event.
After the lunch, those who wished, went up to the Maresía area, located on the top floor of the Hotel, where they could watch the sunset in a unique environment, set with the best music while tasting a cocktail.
The event would end in the late afternoon, with thanks to the sponsoring companies that collaborated in the realization of the event, and with a raffle of various prizes and gifts among all participants, who came with their Ferrari to this VI Meeting of the Ferrari Club España in the Canary Islands.

This site uses Akismet to reduce spam. Learn how your comment data is processed.

Cookies are tools used by Web servers to store and retrieve information about their visitors, as well as to provide proper functioning of the site. You can accept their use by clicking on the button to the right
Cookie policy
Preferences
Accept all cookies
By continuing to browse or by clicking "Accept All Cookies" you agree to the storing of first and third-party cookies on your device to enhance site navigation, analyze site usage, and assist in our marketing efforts.
Cookie Policy
Cookie Settings
Accept All Cookies
Open popup